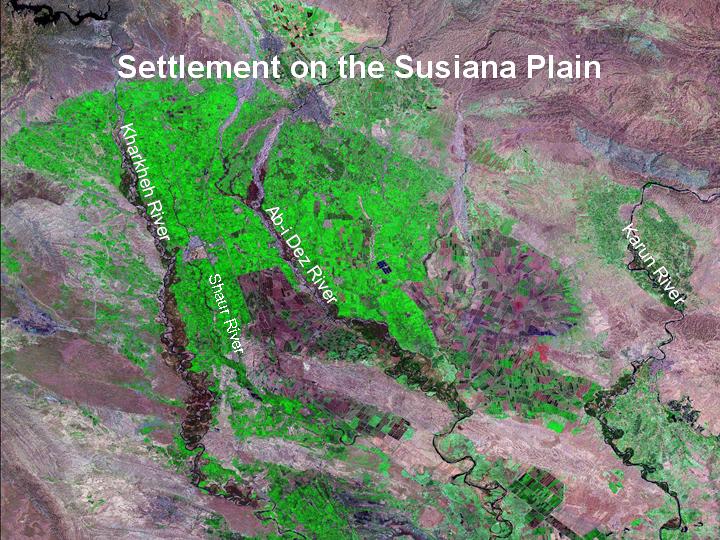 9) The plain has been largely created by alluviation from two major rivers – the Karkheh and the Ab-i Diz or Dez, and it appears to have been settled more or less continuously from the 7th millennium BC up to the present day. The earliest site thus far known on the plain is Chogha Bonut, which was initially excavated by Helene Kantor and subsequently by Abbas Alizadeh (Alizadeh 2003) 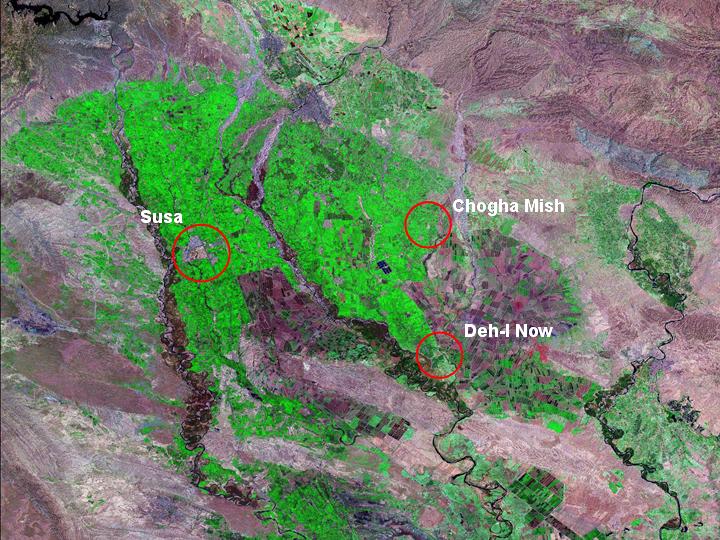 10) The most prominent site on the plain is Susa, which lies at its western edge. Excavations conducted at the site by French scholars from the late 19th century onwards have shown that Susa was first occupied in the 5th millennium BC, and would go on to become the major city in Susiana from then until to coming of the Sasanian Kings in the 2nd century AD. At the eastern edge of the plain is the prominent site of Chogha Mish. Excavations conducted at the site by Pinhas Delougaz and Helene Kantor revealed that it was founded before Susa, during the pottery Neolithic period (Kantor and Delougaz 1996), and that it became a rival centre during the 4th millennium BC (see Johnson 1973). The lesser known site of Deh-i Now lies to the south, close to the Haft Tepe ridge, and the site of Haft Tepe, excavated by Ezat Negahban (1991). Excavations have not yet been conducted at Deh-i Now, but inscriptions discovered during surface surveys suggest that it was particularly important during the Middle Elamite II and III periods, and indicate that it might have been the birthplace of the Elamite King Igi-Halki (c.1400-1100 BC – Potts 1999: 206, 232-233). 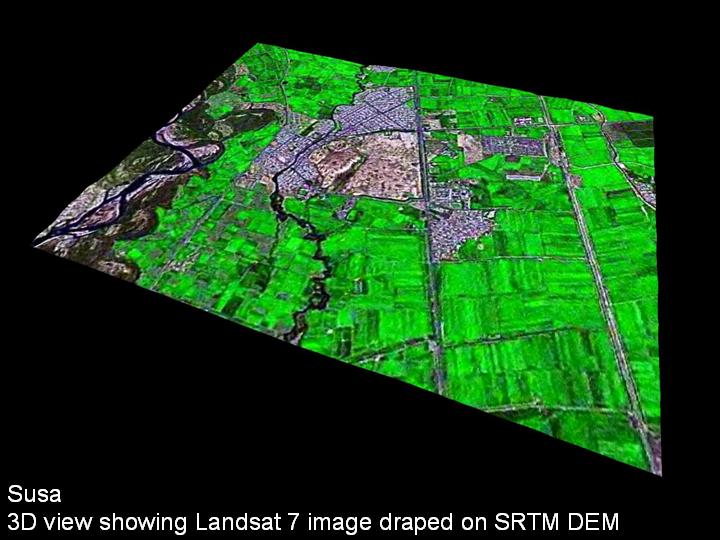 11) Susa is readily visible on satellite imagery and when an 18m resolution Landsat 7 Series artificial colour image is combined with 90m resolution SRTM digital elevation data it is possible to generate 3D images that show the relationship between the site and the surrounding countryside – particularly the dramatic expansion of the modern town of Shush.
See also: Susa on ArchAtlas’ Sites from Satellites and Susa in 3D (VRML) 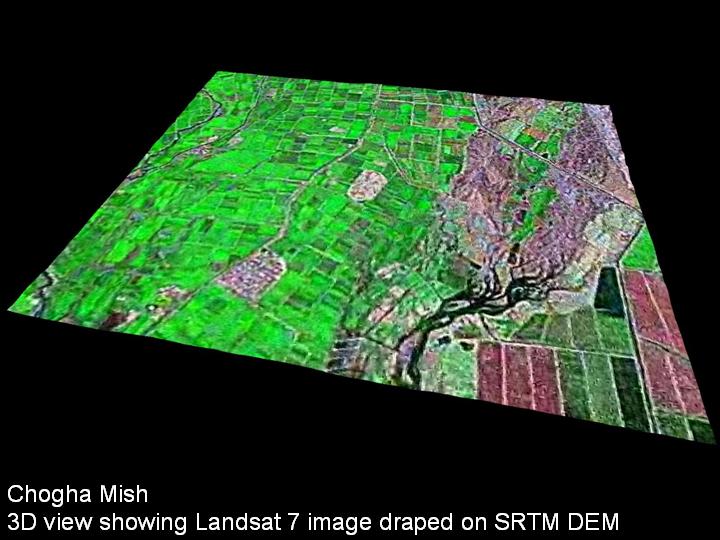 12) In contrast, the satellite imagery shows that the site of Chogha Mish is not surrounded by a modern settlement, but instead by cultivated land. 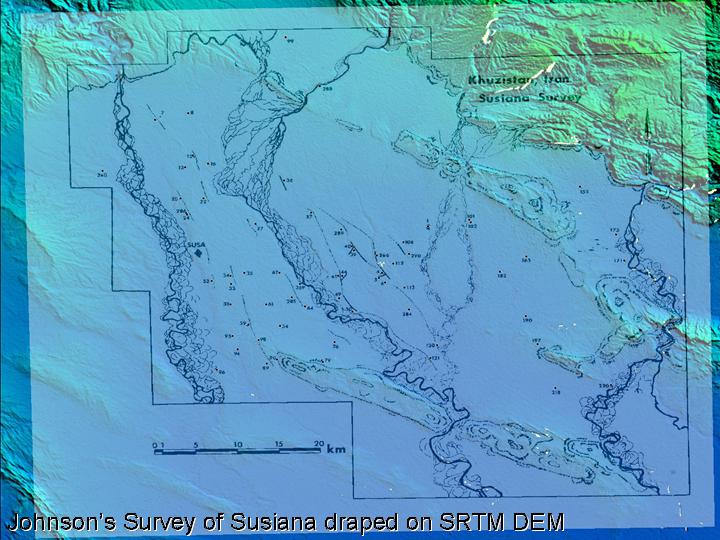 13) There have been numerous archaeological surveys of the Susiana Plain. The first survey that utilised a modern methodology was carried out by Robert McC. Adams’ (1962), and since then, various surveys were undertaken, typically focussing on specific chronological phases (see Kouchoukos and Hole 2003: 54). Perhaps the best known of these was the survey by Johnson, which focussed on sites dating to the 4th millennium BC (Johnson 1973). 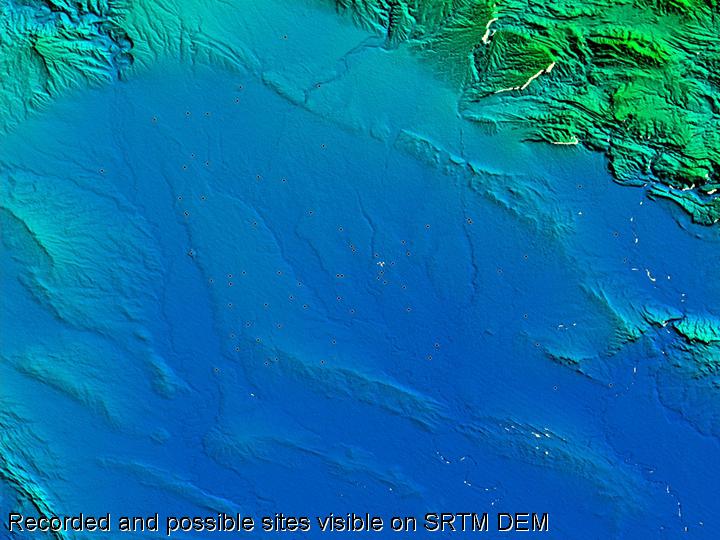 14) It has been estimated that there are well over 1000 sites that date from the earliest (pottery Neolithic, or “Village”) occupation on the plain, up to the classical Islamic period. A large number of these sites can be identified from space, and appear as small bumps on the terrain model (The most prominent sites have been marked with a black dot on the image above). 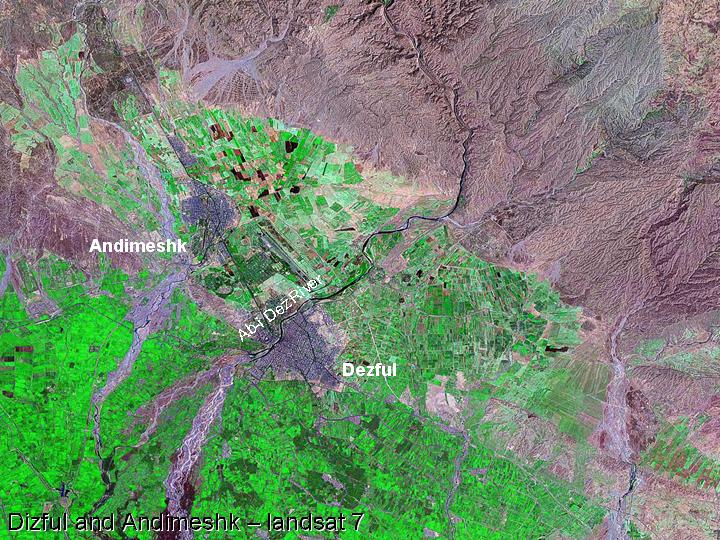 15) A number of other features are also visible on this imagery. The region to the north of the plain is now dominated by the cities of Dezful and Andimeshk. 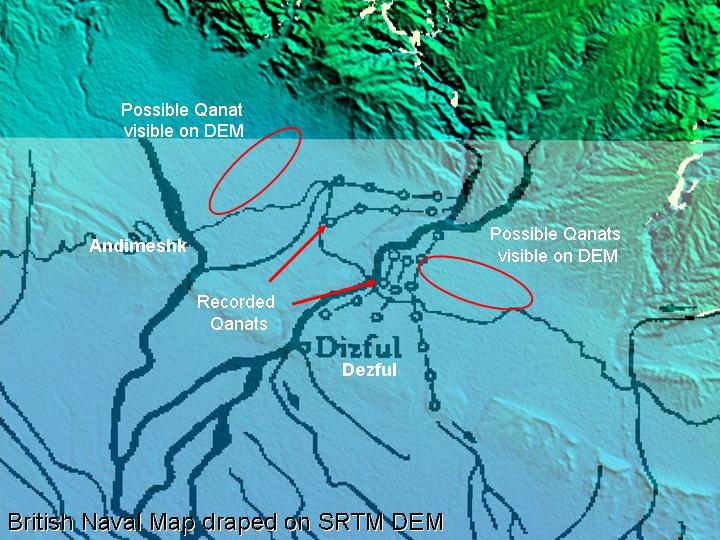 16) The SRTM digital elevation data for the area surrounding Dezful and Andimeshk reveals the existence of tell-tale alignments of features. These might be the remains of qanats that have been dug to secure water resources for the cities, as a number of these are shown in the area on British military maps from WWII.